View source
watch 01:36
We're Getting Mutants in the MCU - The Loop
Do you like this video?
Play Sound
Frankenweenie 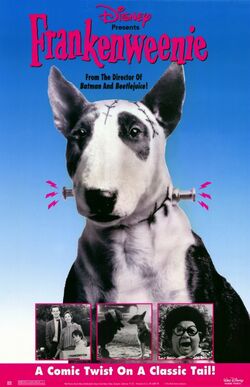 Frankenweenie is a 1984 Tim Burton-directed short film produced by Walt Disney Pictures and co-written by Burton with Leonard Ripps. It is both a parody and homage to the 1931 film Frankenstein and was based on Mary Shelley's horror novel of the same name. It was filmed in 1983.

28 years later, Burton decided to work on a stop-motion 2012 remake of that film.

Victor Frankenstein is a young boy who creates home movies starring his dog, Sparky. After Sparky is hit by a car and killed, Victor learns at school about electrical impulses in muscles and is inspired to bring his pet back to life. He creates elaborate machines which bring down a bolt of lightning that revives the dog. While Victor is pleased, his neighbors are terrified by the animal, and when the Frankensteins decide to introduce the revitalized Sparky to them they become angry and terrified.

Sparky runs away, with Victor in pursuit. They find themselves at a local miniature golf course and hide in its flagship windmill. The Frankensteins' neighbors, now an angry mob, arrive on the scene, and when they attempt to use a cigarette lighter to try to see in the windmill, it is accidentally set on fire. Victor falls and is knocked out, but Sparky rescues him from the flames, only to be crushed by the windmill. The mob of neighbors, realizing their error, use their cars and jumper cables to "recharge" Sparky. He is revived, and all celebrate. Sparky falls in love with a poodle named Persephone and the film ends with Sparky's electricity making the words, "The End".

Community content is available under CC-BY-SA unless otherwise noted.
Advertisement